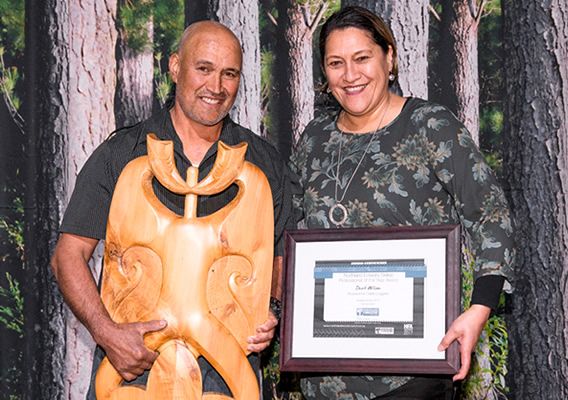 Dave Wilson has walked away with the top prize at the Northland Forestry Awards in a record year of entries.

As well as being awarded the Northland Forestry Skilled Professional of the Year, Mr Wilson also won the Harvesting Excellence Award. He is known as one of the most professional crew managers in the region. He’s worked for Rosewarne Cable Loggers since 2013 and thrives on the challenge of running an efficient harvest crew in often challenging terrain using a 90-foot tower.

While he has high expectations, he leads from the front. Mr Wilson has 11 national certificates, a testament to his quest to be the very best he can and with a keen eye to health and safety. He is a meticulous planner who is always looking to do a job better.

Growing up in Tokoroa, he always knew his work would be in forestry, and looked forward to following his father into the industry. For 13 years he was in the Waikato, working his way up from breaker out to crew foreman. He and his family fell in love with Northland and decided to move.

Since he started with Rosewarne Cable Loggers, he has been based in the Karaka Forest – an area with huge hills, long pulls, blind spots and open to the elements. Forestry companies he has worked for say he is the best around, and the longevity of his own crew highlights just that.

Judge Jacqui Apiata-Coyne says Mr Wilson’s passion and expertise had helped him develop into a highly skilled professional and an authentic leader.

“He is a man whose reputation precedes him,” says Ms Apiata-Coyne. “He leads a team who work in a demanding and complex environment.”

Introduced to the awards this year was the Newey Transport Emerging Talent Award, which was won by Channing Green in a tightly-fought section.

Ms Apiata-Coyne said the calibre of entries this year had been particularly high.

“The competition within the Emerging Talent Award, Harvesting Excellence and Roading Excellence, was incredibly strong this year. The awards are becoming very difficult to judge, there is a high calibre among professionals within the industry and many of those recognised in our awards would be equally recognised on a national platform.”

The awards are one of many initiatives developed by the Northland Forestry Health and Safety Group, aimed to recognised and grow excellence within the industry.

“The Northland Health and Safety Group have a specific focus in developing a healthy and sustainable future for workers and the environment in the region and are making an active contribution to the work plan of the Forestry Industry Safety Council.

“The awards are important as it is a rare opportunity for the whole supply chain to come together and be proud of who they are and what they do,” says Ms Apiata-Coyne. “It also provides an opportunity for the rest of Northland to learn more about the industry and its people.”

This is the third year the awards have been held and organisers are now looking for an industry partner to help take it to a whole new level.

“It’s a chance to celebrate the high achievers and players who hold mana within the industry,” says event manager Prue Younger.

The event has grown each year in both entries and attendance, and she’s confident that will continue.

The 2018 awards were celebrated at the ASB Stadium in Whangarei, with more than 540 on hand to toast the best of the industry. Pio Terei was master of ceremonies.