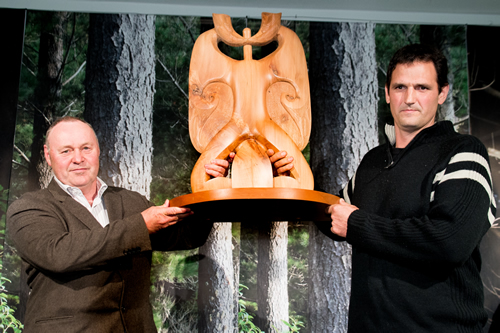 Multi-skilled and hands on winner for Forestry Awards 2016

The 39-year-old father of two from Wise on Wood was the toast of the sold-out formal dinner, which attracted 280 people to Toll Stadium in Whangarei where the very entertaining Eric Rush was MC.

The multi-skilled Harrison can do any task in a ground-based logging crew – from faller to digger operator, loading, fleeting, shovelling, operating a harvester processor and falling, a skidder, bulldozer, forwarder and more. He’s the one who leads by example, who prides himself on making sure the forest owner gets all they can from their stand.

Harrison is considered the go-to man for many in the Northland industry, who call him for advice, to bounce ideas, or just ask his opinion… and he’s always happy to help.

In 2013 he became a FITEC (now Competenz) assessor, following that a year later with contract training and assessing for North Tec. He is known for his attention to health and safety and environmental unit standards believing they go hand in hand with the hands-on tasks.

Harrison was introduced to the world of wood when his family started logging exotic trees, and milling them to build houses. He gained a national certificate in carpentry and discovered what was to become a life-long passion. He continued in the family business with his parents and older brother for more than 20 years, creating a very successful ground-based harvesting operation between them.

Tombleson Logging also did well this evening, with the family taking home the Forestry Family of the Year Trophy and employee Jeremy Gunner winning the Trainee of the Year certificate.

Hancock Forest Management northern area manager Andrew Widdowson, who is the spokesman for the Northland Forestry Health and Safety Group, the organisation behind the establishment of the Awards campaign, was delighted with the response to the inaugural awards. “It is great to see many from the wider industry getting in behind the event,” said Widdowson. “It is all about lifting the profile of forestry in Northland and an opportunity to recognise the experience, commitment and skill of all involved.”

He highlighted particularly those who are held up as real role models through a range of different operations that make up the industry – from engineering through to distribution.
“It’s a real celebration for us all.”
Widdowson is confident a strong foundation has now been set for the awards going forwards for an industry that is a significant contributor to the regional economy.
“The whole process around the awards will only improve over time,” he said.

Jacqui Apiata, ACC injury prevention and management consultant for the northern region, said she, with fellow judges Mike Goodison from WorkSafe NZ and Brett Jobe from Competenz, were most impressed with the calibre of entries.

“We didn’t know what to expect in this first year, but nominees put a lot of effort into their entries and this made some of our decisions really difficult,” said Apiata. “Some of the categories could have gone either way and in some instances it came down to the calibre of the entry.”

All three judges are part of the Northland Forestry Health and Safety Group. “We had a good mix of judges, each of us with different skill base, experiences and knowledge from within the industry, which led to some good discussion.” Apiata says the region is committed to reducing serious harm.

“We are all working towards a culture of safe production where everyone is watching out for one another right throughout the supply chain. The awards are just one of those avenues,” she says. “We are optimistic about the future of the awards which provide the opportunity to recognise professionalism within the industry and grow leadership as news travels further into the bush.”