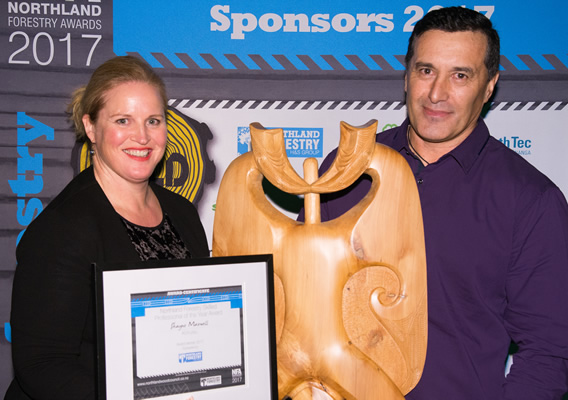 A man who leads by example to the highest of standards was tonight crowned the Northland Forestry Skilled Professional of the Year before nearly 500 of his peers at the annual awards.

Shayne Maxwell was awarded the prestigious and much sought-after trophy by Honourable Louise Upston. He was nominated for three categories – for health and safety, felling and harvesting, and en route to the supreme award, took out the Individual Harvesting Excellence Award, and was joint winner of the Outstanding Health and Safety Management award.

Mr Maxwell works as a health and safety manager and company trainer for Kohurau Contracting, but still keeps his hand in as a faller, breaker out and hauler driver.

He grew up in the central North Island, starting his forestry career in ground base and hauler logging before moving his family to Northland.

He’s known for his integrity, morals, character and values, which he integrates into his work days.

Not one to sit on his laurels, Mr Maxwell is part way through a bachelor’s degree in psychology, which he is already putting to good use out in the forests. He works on mindfulness and other platforms to motivate people to maintain safe practice.

His employers say that he brings mana to their company and as an expert hauler faller, can truly walk in the shoes of others he works with.

Mr Maxwell developed the health and safety systems, with a particular focus on falling and breaking out, for Kohurau Contracting. He pioneered the use of video and photographs for the company, recording faller behaviour and techniques and using them to teach crews.

He has also helped develop the company’s use of scanning technology and smart phones to record and share vital information. His peers say the much-improved safety record of the company is a huge credit to Mr Maxwell.

“Shayne has shown he has the qualities to become a legend of our industry,” said Ms Coyne-Apiata, who judged alongside Brett Jobe and Mike Goodison. “He is someone we felt could stand before the industry and be celebrated. He has a high level of discipline and wisdom and is continually developing himself so he has more to offer.”

Two new categories were introduced this year to the awards – the Faller Excellence Award and the Breaker Out Excellence Award – and both had been very well supported with an extremely high calibre of entrants. The Harvesting Excellence Award had a number who could have “stood on the stage and owned it”.

“That is really exciting for our region and the industry,” said Ms Coyne-Apiata. “It is great to see the level of competition and the number of contractors and individuals who are really demonstrating their leadership – especially in the health and safety and environment categories.”

This is the second Northland Forestry Awards, and organisers are very pleased with the increased number of entries and support they received from the wider industry and sponsors.

“These awards are showing in this second year, how important they are for the industry in Northland because it is a chance to role model the professionals we have and continue the development of our safety culture within the region,” says Andrew Widdowson, chair of the awards organising committee and spokesman for the Northland Wood Council. “The Northland Forestry Awards provide us with an occasion to celebrate the industry and the positive impact it has for the region, the fantastic people we have working on the ground and the opportunities if offers.”

TV raconteur Pio Terei was the MC for the awards, which were held at the ASB Stadium Kensington.