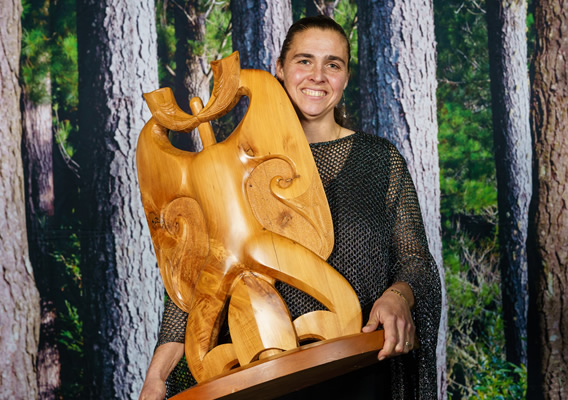 A woman considered the backbone of her company, a camp mum to her crew and a team member who will step into any position was tonight crowned the Northland Forestry Skilled Professional of the Year.

Michelle Harrison, who owns Wise on Wood with husband Nigel, was awarded the top trophy by the Regional Economic Development Minister Shane Jones and also won the inaugural PF Olsen Woman in Forestry crown at the fourth annual NFA Northland Forestry Awards before an industry-stacked audience of nearly 500 people.

Those who have worked alongside Michelle had nothing but high praise for this very driven mother of two saying she was always willing to share her knowledge with others and a very talented and capable woman. She was considered a great role model for the industry.

Eighteen years ago, Michelle had married into as well-established logging family, working in the business before she and Nigel started their own ground based harvesting crew in late 2015. They started small with just two in crew with Michelle initially the log maker and skiddie. The company has grown now, with a crew of seven and Michelle processing more than 350 tonnes a day driving the processor. This year the company notched a record month of in excess of 10,000 tonnes. Michelle also does the office work and the health and safety side of Wise Wood while being a mum, wife, chair of the Okaihau College board of trustees and being with school and sport activities.

She is passionate about the environment and always looking for ways the company can improve its impact on the environment and to protect wildlife within their harvest areas. This year she was instrumental in the relocation of the protected Kauri snails she discovered while helping to prepare an area for harvest. She has also worked with kiwi during and post-harvest, taking on the responsibility of monitoring the birds during harvest. Michelle is hoping to get her kiwi handling licence this year, to be followed by her own kiwi tracking dog.

Wise on Wood has an excellent reputation for its health and safety practices, environmental awareness, producing good returns for forest owners, and all the while keeping harvest managers and staff happy.

Wise on Wood also claimed the Competenz Trainee of the Year with Kiesten-Breeze Repia receiving the certificate and Mark Lavakeiaho walked away with the Forest Industry Contractors Association Emerging Talent of the Year Certificate.

Judge Mike Goodison has been involved with the event since its inception four years ago and said each year the standard of entries rose. He was chuffed to see that the integral part health and safety played in the industry to also continue to track higher with everyone – not just something imposed and only done when someone was watching. Mike thanked everyone who had entered or been entered in the awards. “It is brave to stand up and allow yourselves to be judged,” he said.

Judges Mike, Jacqui Apiata-Coyne and Brett Gilmore had debated long and hard over who would win some of the categories with “the proverbial cigarette” paper in play when trying to separate some nominees. He encouraged everyone to continue to stand up and showcase the industry through professionalism, innovation and hard work.

Jackie Clarke was the MC for the 2019 awards which were again seen as a showcase event for the forestry sector in Northland.